This is intended as a “zero-knowledge” guide to reading the UK’s 2021 Integrated Review policy document: “Global Britain in a competitive age: The Integrated Review of Security, Defence, Development and Foreign Policy” link. It is aimed at first year undergraduates who may have little or no knowledge about how the UK’s political system works, and therefore aims to provide the reader with a lot of background knowledge that more knowledgeable readers might not require/need.

This guide is currently complete up to the Strategic Framework Section, I’ll be completing that over Christmas 2021.

As such, this is an example of a fundamental political process in the UK: the government says something, then presents it to Parliament for discussion and review. This was presented to Parliament on the 16th of March 2021 by the Prime Minister Boris Johnson. Watch here: https://www.youtube.com/watch?v=gyheDGxa0vc

With regards to the photo, I think the one aesthetic choice that is important to note is that it effectively says nothing. It is a photo of the UK, but you’d have to squint and tilt your head sideways (and know what the UK looks like) to get that. It is, however, more glossy than the front cover of the previous review, the National Security Strategy and Strategic Defence and Security Review 2015: 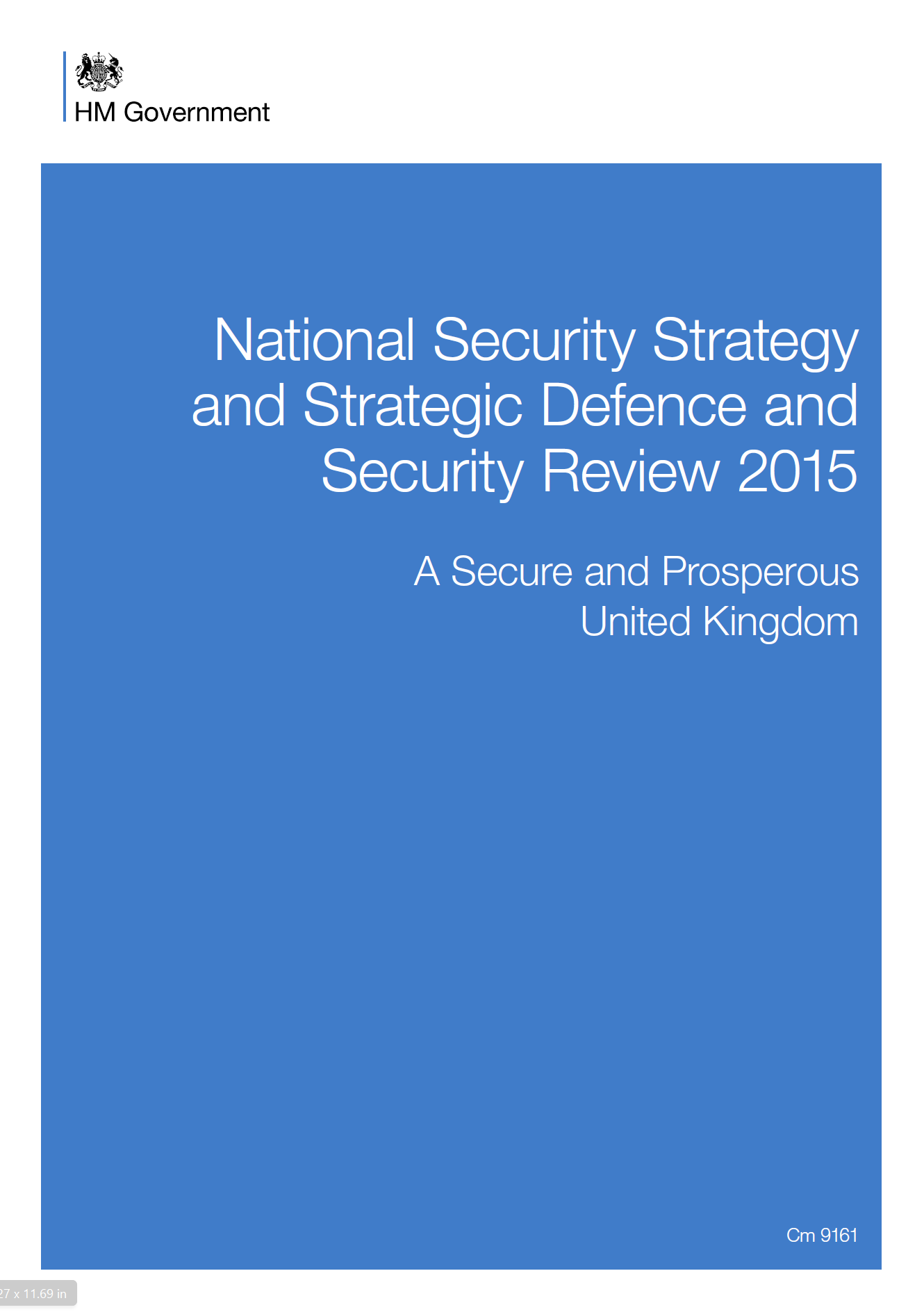 Now, with all of that out of the way, the title:

Global Britain in a competitive age: The Integrated Review of Security, Defence, Development and Foreign Policy

Three things are important in the title. First up: “Global Britain”. This is a statement that Britain is to be perceived as, and thought to be, a global power. Second: “a competitive age”. This reflects ongoing debates in international politics about “great power competition”. Specifically, this is nodding towards the fact that the IR is trying to figure out Britain’s place in a world where the US and China see themselves in a competition for hegemony, and other big countries such as Russia are seen as challenging the post-Cold War order.

Now we get to the sub-title: “The Integrated Review of Security, Defence, Development and Foreign Policy”.

The reason for the title is actually a clue to the relationship between this document and the government departments who actually have to implement this. Although an outward focused document, the contents are relevant to all government departments/organisations concerned with providing security to the UK (e.g. the Cabinet Office, the Home Office, the National Security Secretariat). Specifying defence in the title indicates that it is important for the Ministry of Defence.

But why separate out development from foreign policy? Well, when this review was first announced, the UK had a government department dedicated to overseas development - the Department for International Development - as well as the Foreign and Commonwealth Office, whose remit is foreign policy. These two were rolled into one department, the Foreign, Commonwealth and Development Office in September 2020 (the perceived loser in this event is the one whose department name got tagged to the end of the other).

But you can’t change the name of the IR mid-process, so the name sticks. One thing to reflect, therefore, is that by the time this document was published, the name and process reflected political structures that were already out of date in domestic UK politics.

Things to note before we look at the structure proper:

2030: This date pops up in both the PM’s foreword, and the third section (“The national security and international environment to 2030”). This document, published in 2021, is looking ahead about ten years, as a plan for the future.

One thing to note about all of this is that “Strengthening the UK’s place in the world” is the sixth main section of the document. Everything the IR is concerned with is a fraction of the Treasury’s overall concerns (or government efforts as a whole). Secondly, if you look at the Departmental settlements, the Treasury is funding departments through to 2024-5. This means that while the IR is explicitly looking forwards 10 years, the Treasury has only explicitly funded the plans for about half this period of time. In the IR itself, it explains that the Strategic Framework goes to 2025.

Okay, so onto the structure of the IR.

A good initial way to understand these kinds of documents is to try and work out their priorities in terms of attention given to different topics.

The obvious core to the document is section IV - the “Strategic Framework”. Out of 99 core pages (excluding front matter and appedicies), 63 are dedicated to this section.

The IR consists of a short foreword from the PM (3 pages), some vision statements and infographics from the PM (4 pages), an overview (13 pages), an assessment of the international environment (10 pages), the strategic framework (63 pages), and a section on implementing the review (4 pages).

One thing to keep in mind is that these kinds of documents are designed to be read in whole by people who really care about the topic, and also designed so that people can get the gist of what’s going on without reading the whole thing. The PM’s foreword is a nexus between the political nature of the document (it is tied to Boris Johnson’s government and its political priorities). The overview is what will give you a very short and crisp understanding of the what’s going on. The foreword is therefore going to be where you’ll find some stuff that is tied to contemporary political discourse in the UK and perhaps partisan framing of some issues.

Even though it might feel like you can just skip to the overview, the foreword is important for understanding the document itself.

The third section, “The national security and international environment to 2030”, is going to tell you what the foundational assumptions behind the document are in detail. For this reason, it is important to read, but also keep a critical eye out - the nature of such a section is that it has to identify and explain key assumptions and priorities, and therefore it has to leave a lot of other stuff out.

So, the structure of the strategic framework.

The point of a document like this is to give the whole of government an understanding of how and why the UK is going to organise itself to engage with the world in a particular way. Importantly, this is about conceptual organisation. The world is a complicated place - in order to have a hope of understanding it, you have to use concepts to connect related issues together and simplify things. However, the danger is that two different people, or departments, will end up with different conceptual maps, reflecting their own view of what is important, and how things tie together.

For that reason, the strategic framework (and the rest of the document) provides a way for officials and policymakers to collectively understand what’s going on, why it’s happening, and how the government is going to respond. Understand it as a specific collective simplification of international politics.

The value of this document (and others like it) is that its choice of concepts can tell you about how the government collectively evaluates its situation, and also how it seeks to engage with the world.

These don’t perfectly map to “Security, Defence, Development and Foreign Policy”, and that’s the point: the document is saying that out of all the things that could possibly be covered within these domains, these are the four priorities.

Lastly, before we move to the document proper, I think we need to note the italicised sub-elements in the strategic framework:

The fact that these things pop out in the contents page is important. It gives the reader a chance to flick to a specific page to check exactly what’s going on with each term. Their importance is, I think, underlined by the fact that one of them is about the UK’s nuclear deterrent capability. Nuclear weapons are a big deal! The first term appears to be related back to the “Global Britain” discussion earlier: it is a self-description of what the UK is, and should be, and therefore a key reference point.

But what about “Indo-Pacific tilt”? If you have no prior knowledge of UK defence and foreign policy debates, this term is likely unknown to you as it is the unique term on the contents page. It is, however, very important. The reason for this is that the inclusion of IPT here reflects that the document is taking a side in some pretty weighty debates that are, for the time being, outside the scope of the document itself.

Defence and foreign policy debates are characterised by different interpretations of what is the best way forwards for a particular country. Where should the diplomats and trade negotiators spend their time? What kind of army do we need? What kind of ships should we build? These are subsidiary questions to an overarching notion of what kind of engagement is good for a country, and what regions of the globe it should engage with.

When you’re a superpower (the US, China), you can afford to engage with everywhere in at least a minimal way (whether or not you choose to do so is a different matter). When you’re a small state like Singapore, you can’t afford to have a diplomatic presence across the world (any form of diplomatic presence requires money to keep the lights on, etc), so you have to be selective. The UK is somewhere in between: once an Empire, now a very rich country (member of the G7), but while we can afford to have a huge network of diplomatic missions, we can’t afford the kind of global footprint that the US has, and China is quickly developing.

Some people think the UK should be focusing upon Europe and building the ties and capabilities to deter Russian aggression. Others think we are best placed to split our focus between Europe and the Middle East. Others think we’re better off engaging with countries across Africa. But a substantial number of people think we should be focusing our resources and attention on building ties in the Indo-Pacific region. Pretty much everyone thinks we should continue to be close allies of the USA though.

The choice of “Indo-Pacific” is itself a political conception - tying together the Indian Ocean and the Pacific Ocean into one area of engagement and concern. The IPT is basically indicating that the UK will shift attention towards this region, both in political and military terms.

I’m highlighting this now because what is important for you to know is that this is fundamentally about trade-offs. A critical engagement with the IR requires you to understand the tradeoffs that are implicit in the document itself, but you are unlikely to get a full understanding of these tradeoffs from the document. After all, it’s trying to sell the selected tradeoff as the right thing to do!

Every state has to make trade-offs - the USA is no exception in this regard. The problem for non-super powers like the UK is that the USA can screw up and recover, whereas if the UK makes the wrong trade-off it can be catastrophic. This is not to say that the US can’t make catastrophic decisions, but the US could cut its army in half and regenerate it relatively quickly, whereas if the UK’s army was cut in half tomorrow, it would lose key areas of expertise that would be impossible to replace at speed.

So what I’m saying is that before jumping to any conclusions about whether or not something is the right thing to do, we first need to understand what the actual choices being made are.

I. Foreword from the Prime Minister

The Prime Minister’s vision for the UK in 2030

III. The national security and international environment to 2030

2. Shaping the open international order of the future

The UK in the world: a European country with global interests

The Indo-Pacific tilt: a framework

3. Strengthening security and defence at home and overseas

NB: Insert on the Nuclear Deterrent is split out to the end of the section

4. Building resilience at home and overseas